It's September, which means only one thing – it's time for another GoPro action camera. Sure enough, a successor to the excellent GoPro Hero 8 Black has arrived and it's imaginatively called...the GoPro Hero 9 Black.

A pretty bold take on the company’s tried-and-tested action cam formula, this time 5K video capture and a DJI Osmo Action-style front screen have been added to the mix.

There’s plenty to compare across the 2019 and 2020 flagship GoPro cameras, from the Hero 9 Black’s bumped up battery and beefier body to its bigger display. If you think this is going to be a Hero 9 Black love-in, you’re only partly right – the Hero 8 Black is still an excellent option, especially if your budget’s tighter.

With a standalone price of $449.99 / £429.99 / AU$699.95, the Hero 9 Black costs around 11% more than its predecessor did at launch. But there's an added complication this time, because GoPro is pushing its new subscription service (formerly called GoPro Plus).

So if you’re weighing up your options, read on to figure out which camera will best meet your high-octane needs, without costing more than your willing to pay.


The Hero 9 Black is around ten percent bigger than the Hero 8 Black. Weighing 158g (compared to its 126g predecessor), you feel it as soon as you pick it up, and with a width of 71mm and a depth of 33.6mm, it definitely isn’t the smallest action cam on the scene.

It's still easily pocketable though, so that doesn't make too much difference on its own. But the knock-on effect is that your old cases or Mods like the Media Mod won't fit on the new GoPro. Still, there is a reason it's been blown up in size. 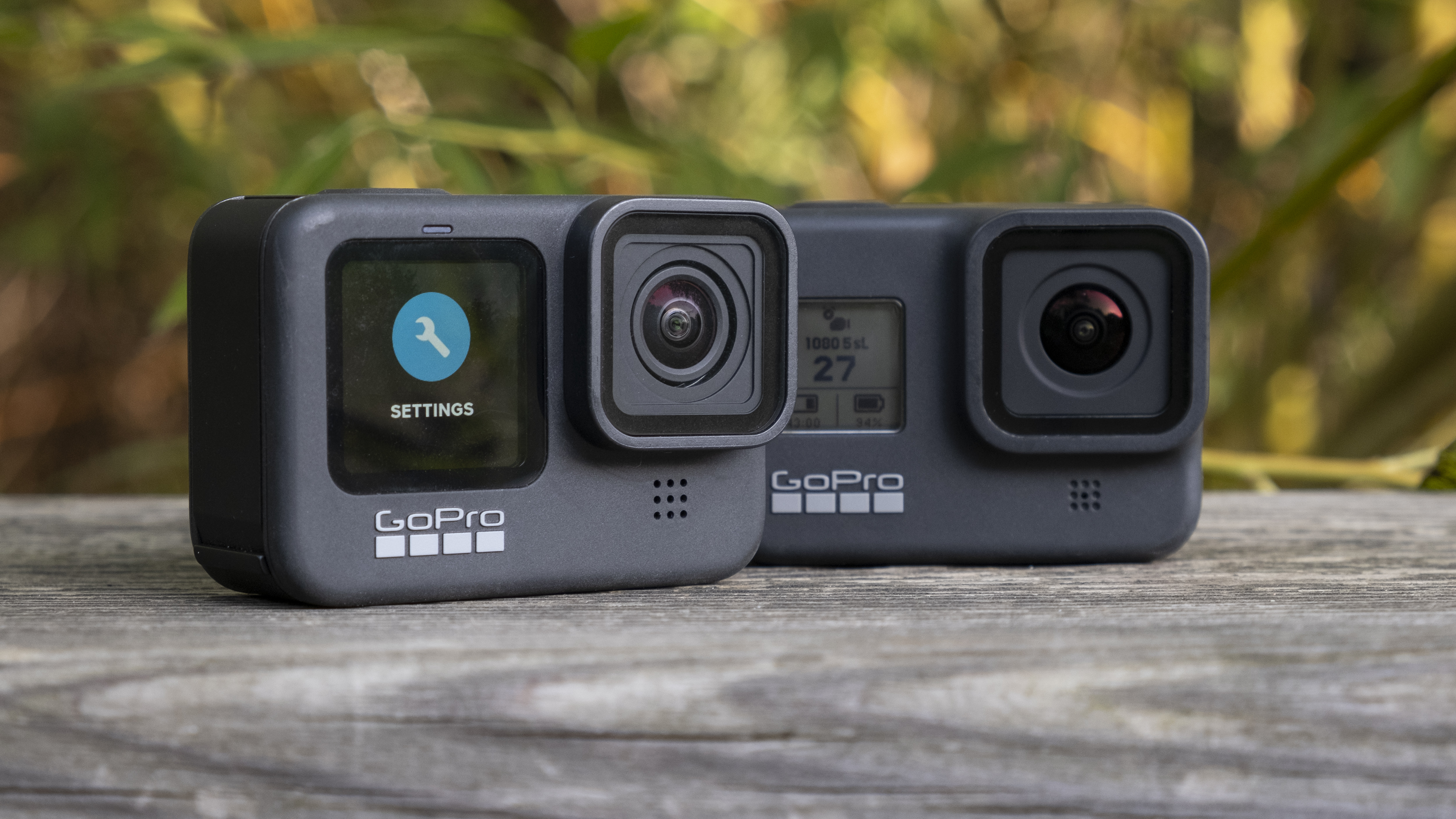 The Hero 9 Black sports a bigger touchscreen around the back than previous years’ Hero flagships – it measures 2.27 inches, which is up from 1.95 inches on the Hero 7 and Hero 8.

Sadly, we've found this to be a little unresponsive and laggy in our early testing, but GoPro says a firmware fix is coming in November. Still, this extra size is very welcome regardless, whether you're framing shots or jabbing it to switch settings in a rush.

2. More resolution to play with


With its new 23.6MP sensor, the GoPro Hero 9 Black has almost double the sensor resolution of the Hero 7 Black and Hero 8 Black, which enables it to capture up to 5K video and 20.2MP photos. 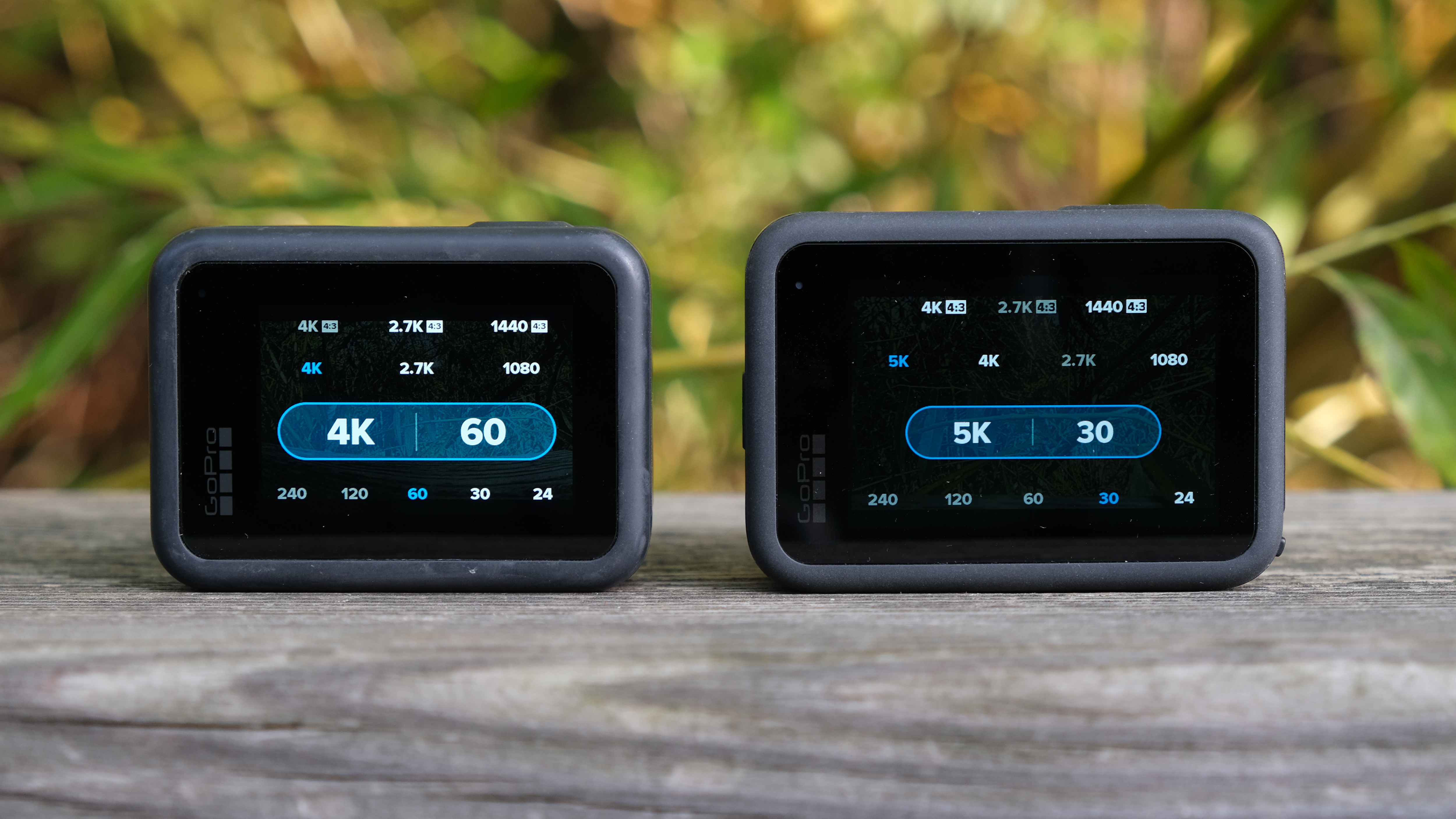 Frame grabs are now an ample 14.7MP, and look usable for social shares and small prints, provided there’s no motion blur. This might sound like a fantastically big deal, but the Hero 8 Black shoots in 4K, which means 12MP stills – which is also ample for most social media posts.

If you’re big on photos, this is where the Hero 9 Black is noticeably crisper, thanks to its 20MP stills. In well-lit environments, cropping into its photos delivers a clear boost in detail by comparison to its 12MP counterpart, although overall image quality is very similar.


For generations, GoPro's Hero flagships have sported 1 220mAh batteries. They didn’t last long (just over an hour when shooting 4K), but this was largely forgivable due to their compact size. Now, GoPro’s bumped up the battery capacity to 1,720mAh on the Hero 9 Black, which it claims boosts its stamina by about 30%. 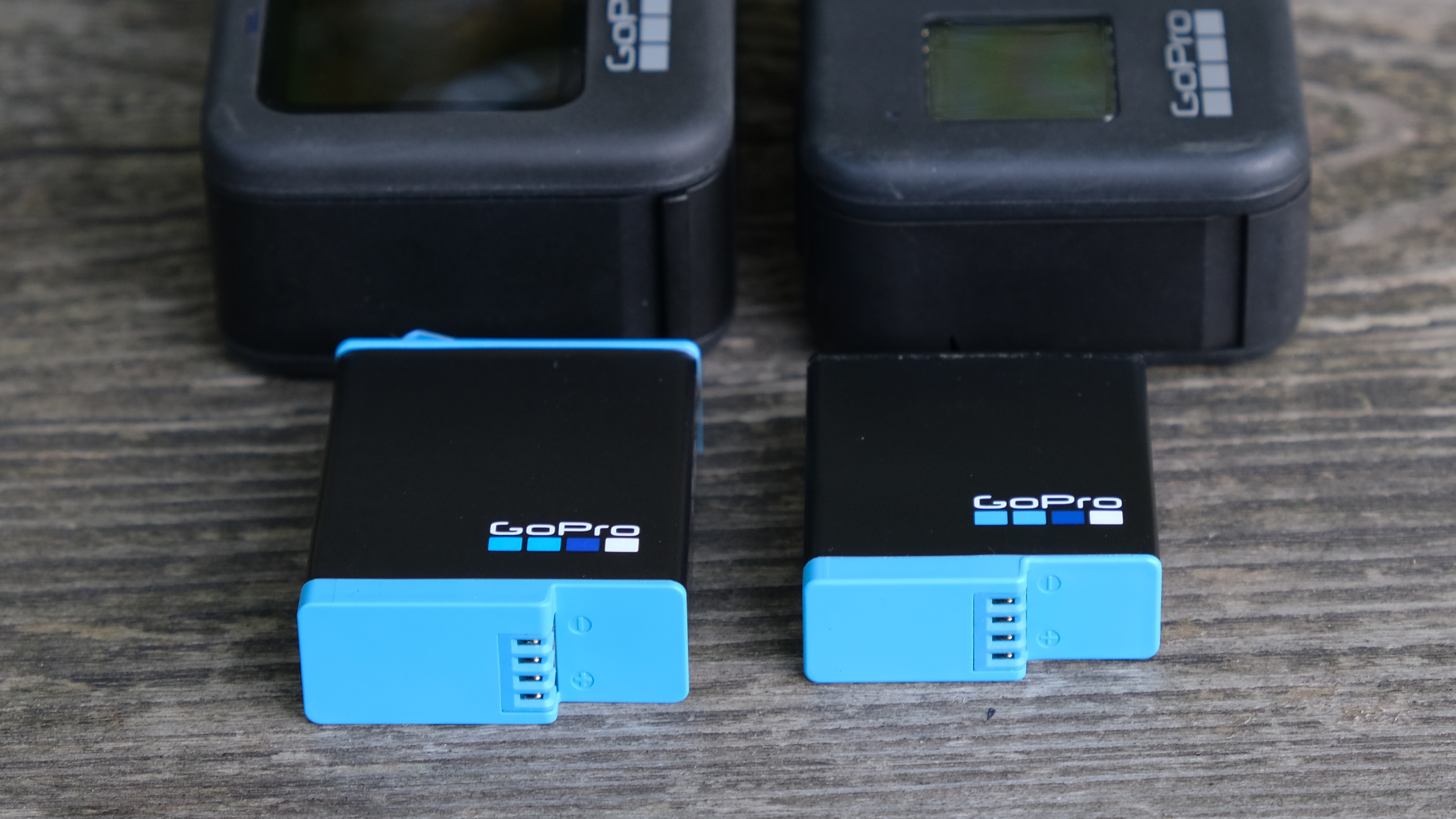 This results in significantly better performance when capturing Full HD video, with the Hero 9 Black recording for in excess of two hours and 10 minutes in our tests, by comparison to the Hero 8 Black, which died after one hour and 30 minutes.

The bigger battery size also means the Hero 9 Black can handle extreme cold better according to GoPro, so should make for a mightier action camera on the slopes.

On the flip side, we did experience overheating with our Hero 9 when shooting 5K video. After 30 minutes, it powered down and was very hot to the touch, so even if the battery won’t hold you back, when shooting at full resolution, the heat might.


Like the DJI Osmo Action, the Hero 9 Black combines a touchscreen with a full-color front screen, which should help vloggers frame up their shots, and give anyone filming without access to the rear screen a handy preview. 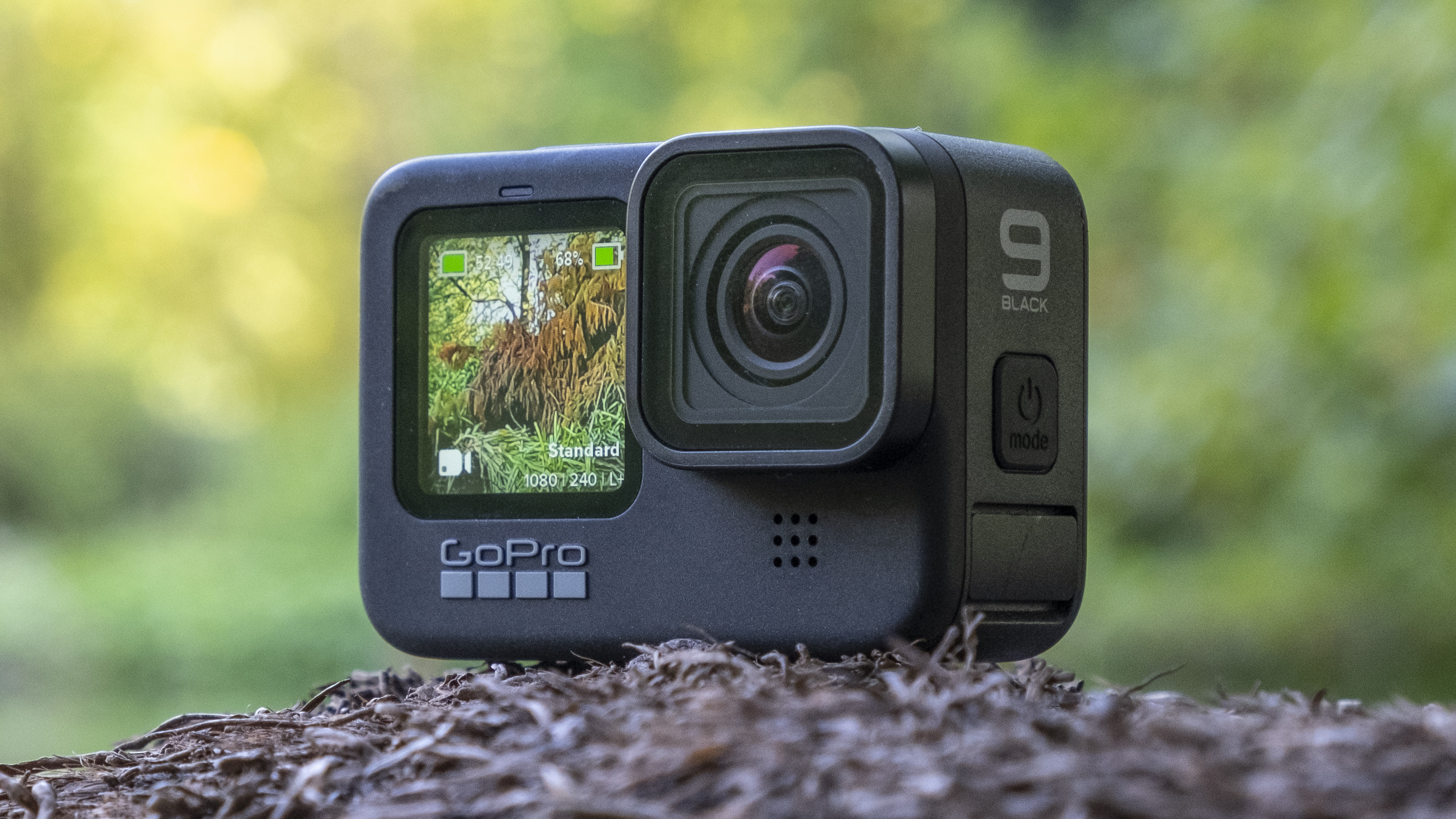 The Hero 9 Black’s front display isn’t touch-sensitive, and neither is it silky smooth when previewing 5K video capture. You also can’t disable it in the settings, which could be annoying if you just want to focus on saving battery life. Having said that, it will timeout after as little as a minute, just like the rear display.

As with the Hero 8 Black’s monochrome front display, the Hero 9 Black’s also showcases your shooting resolution, frame-rate, remaining battery percentage, and remaining memory card capacity. You can also choose between it showing a full preview of the scene (complete with letterbox look), or a cropped center section of its view. We definitely prefer for the former, but it's good to have the option.

5. Return of the swappable lens cover


The Hero 8 Black ditched removable lenses from the Hero line to a mixed response. For 2020, GoPro hasn’t just reverted back to the swappable lens option of old, it’s created an interchangeable lens mod called the Max Lens Mod. 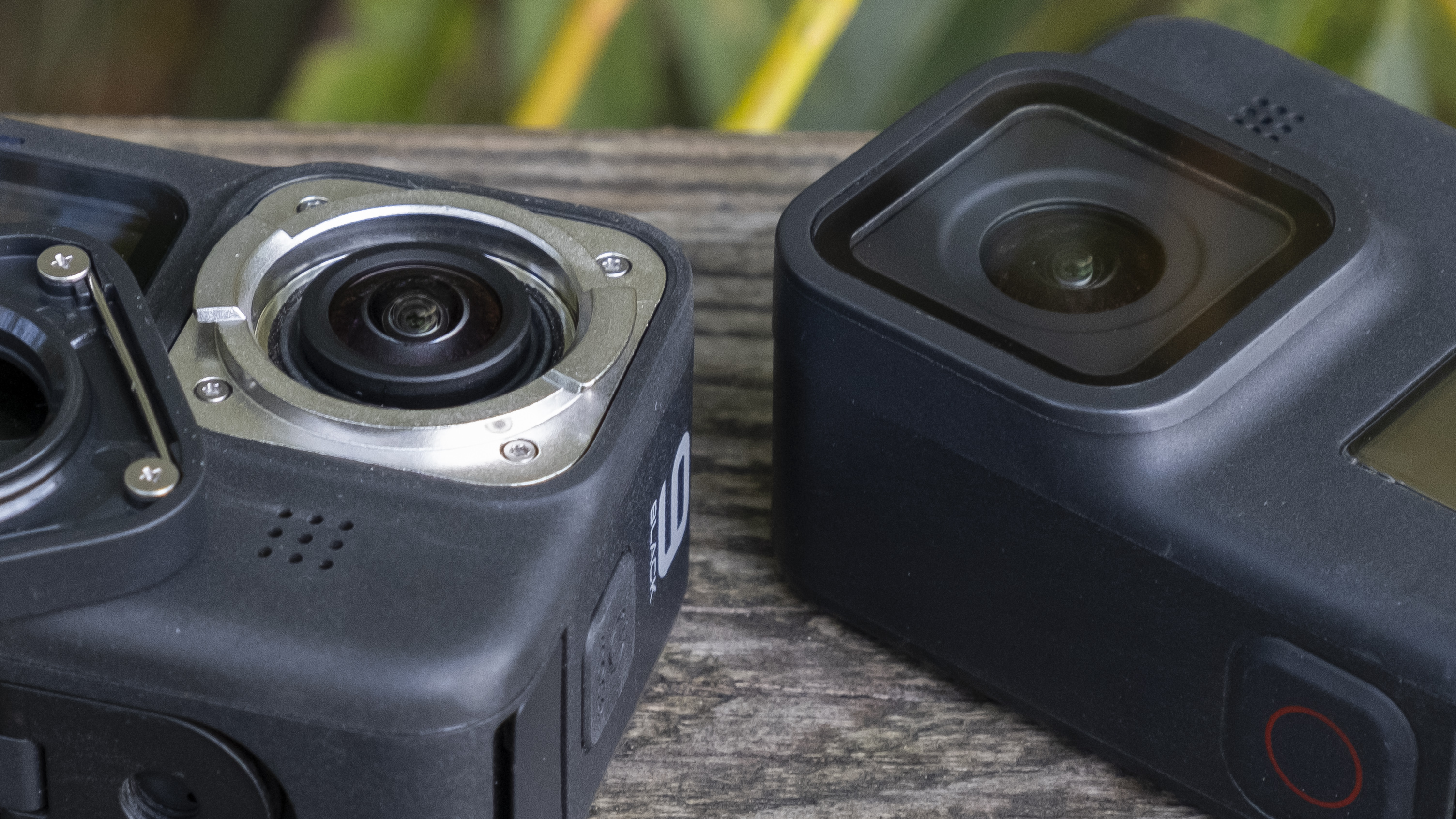 Out of the box, the Hero 9 Black’s field of view is narrower than that of the Hero 8 Black, but with the Max Lens Mod, the Hero 9 can shoot at up to 2.7K resolution (60fps) with a 155-degree field of view.


GoPro’s HyperSmooth image stabilization is the best we've seen on any action camera – and when GoPro introduced Boost, a cropped, lower-resolution way of eking out even more steady footage from the Hero 8 Black, fans rejoiced.


Now, the Hero 9 Black shoots with both Hypersmooth 3.0 and Boost active at full 5K resolution. This is an improvement on the Hero 8 Black, whose Boost was capped to 4K/30p (and only in Wide view, rather than Superview).

Perhaps the main benefit of the Hero 9 Black's extra resolution, then, is giving it the leeway to apply those cropped stabilizations in more demanding situations. If you don't shoot a lot in extremely juddery situations, the Hero 8 Black's stabilization could well be more than enough for you. But downhill mountain bikers will likely be reaching for the Hero 9 Black.


We’ve already spoken about the new Max Lens Mod, which enables GoPro Max-style horizon locking on the Hero 9 Black, but you don’t need a mod for basic horizon leveling.


Out of the box, GoPro’s new action cam can level out your footage using the onboard sensors, something the Hero 8 Black could only do in the GoPro app. While this won’t keep your extreme spins looking spirit level steady, moderate tilts are compensated for nicely.


If you’ve played Prince of Persia, Sands of Time, think of Hindsight as the action cam equivalent of the dagger of time.

A headline Hero 9 Black feature, Hindsight can capture up to 30 seconds of footage before your finger hits the record button, so you needn’t rush and fumble in the heat of the moment to capture the action. 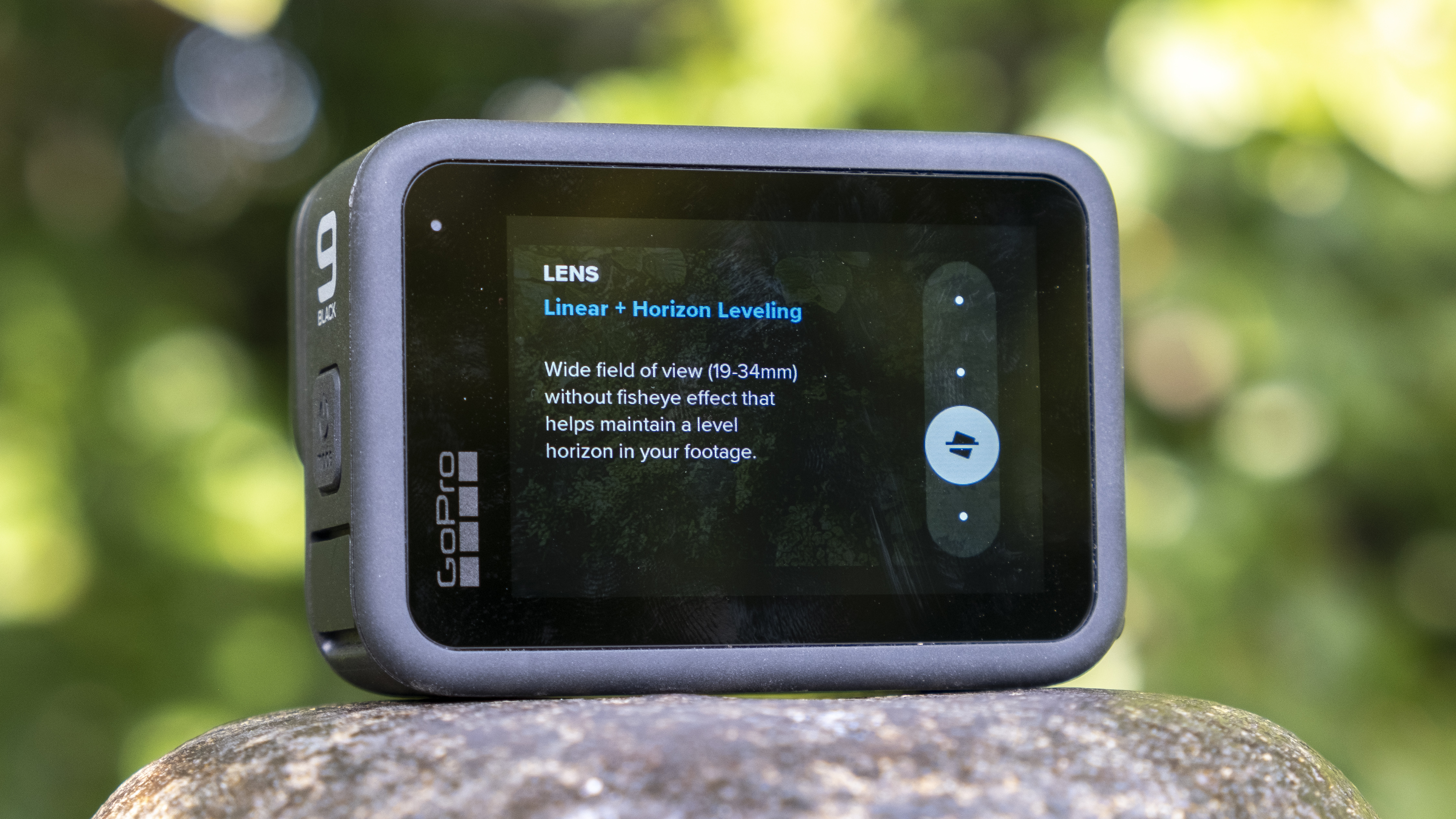 Simple to activate, you can set a Hindsight shortcut on your viewfinder, so it can easily be toggled on and off, and it works across all resolutions.

Meanwhile, Hero 8 Black users will just have to be hot off the mark with hitting that record button. And will potentially fill up their memory cards in the process of trying to nail the perfect moment.


The Hero 9 Black’s bag of tricks don’t stop there. Another feature missing from the Hero 8 Black is Scheduled Capture, which, as the name suggests, enables scheduled recording – all controllable within the camera.

Set the Hero 9 Black to start capturing a timelapse, and fifteen minutes before sunrise, you can have a lie-in while the Hero 9 Black wakes up all by itself. It could also be handy if you plan on using multiple Hero 9 Blacks to start recording an event at exactly the same time for easy syncing. 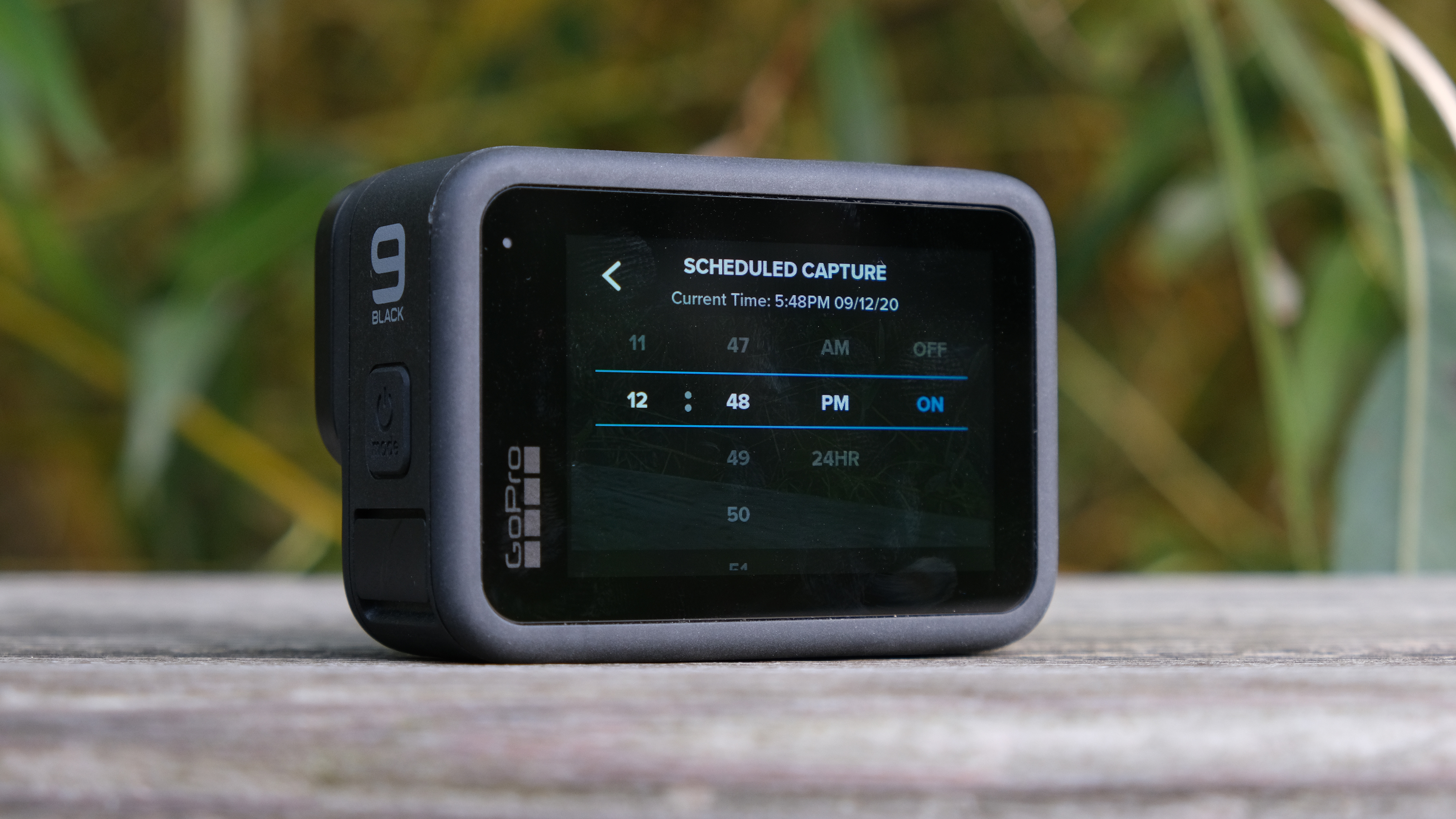 Old favorites are also back, only this time, in their third evolution. HyperSmooth 3.0 and TimeWarp 3.0 have seen incremental improvements over the Hero 8 Black, with the latest incarnation of TimeWarp now recording audio when you slow your fast-motion footage down to Real Speed of half-speed.

Whether you buy the Hero 8 Black or Hero 9 Black will be down to your needs and budgets. If you want the most fully-featured GoPro or vlog a lot, then the latest is the greatest. Having said that, if you want excellent 4K video and more than adequate in-body stabilization at a lower cost, the Hero 8 Black represents the better value for money of the two. Particularly with GoPro's current subscription bundle.